Are Your Workouts Making You Fat? 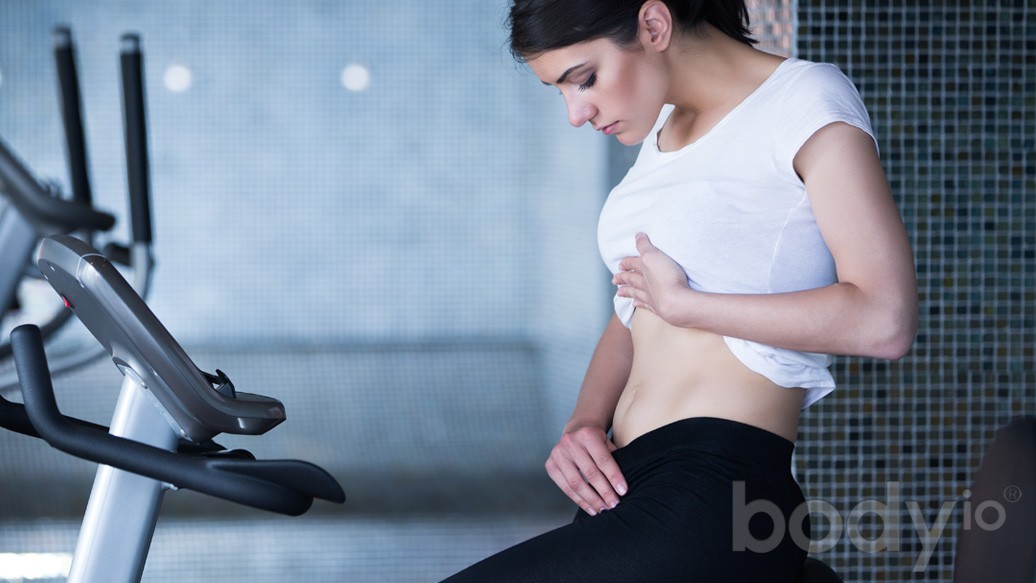 see her in the gym every day. Let’s call her Sarah. She arrives in her heels and business casual attire, changes into her sneakers and Lulu gear, and begins to stretch and roll out on the gym floor. She smiles and chats with gym acquaintances before hitting the treadmill for a quick warm-up. She squats. She pushes a sled. She stretches. She leaves. I see her in the gym every day.

Sarah isn’t getting any thinner. As a matter of fact, Sarah appears to be gaining weight – and not the good kind. The story that I don’t know about Sarah is that she isn’t happy; she’s high strung, to say the least. She wakes up early, works long hours at an unsatisfying job, and then drags herself to the gym after every monotonous day. It’s the least she can do, right? She hates working out, but how is she going to lose that weight if she doesn’t get to the gym? She’s read all the fitness blogs, and they tell her that squats will build a booty and blast fat. So why is Sarah’s ass getting softer while her belt continues to tighten?

The answer is something we don’t often consider but is without a doubt one of the most important links in the human body: The brain and the gut are in cahoots, and their relationship controls far more than most people know. Not only can conscious thoughts and activities make you gain weight, but also subconscious patterns and habits[1]. For these reasons, exercise alone – even with mindful nutrition – can all too often lead to failed weight loss efforts. Let me explain . . .

As humans, we control certain things consciously, whereas many physiological processes occur without our direct control, mostly to keep us alive: heart rate, respiration, temperature control, hormones, etc. These are all controlled by the ANS. Long story short, the ANS cares entirely about survival and can either ramp things up in response to stress (sympathetic system) or slow things down to recover from stress (parasympathetic system). When the nervous system is well balanced, fat loss will occur in the presence of exercise and an appropriate diet. When out of balance, however, you’ll either achieve no results or even gain weight[2]. Many people, like Sarah, find themselves heavily unbalanced towards the sympathetic response due to excessive chronic stress. It doesn’t matter if it’s emotional, work-related, or physical; stress is stress and our body doesn’t delineate between one or the other based on the source. Furthermore, the parasympathetic system does the vast majority of its work while you sleep, so sacrificing sleep to “do more work” only compounds the issue exponentially. If you’re grinding it day in and day out, you’ll benefit far more by increasing your sleep than you will by adding extra gym sessions.

In addition to the parasympathetic and sympathetic nervous systems, there is also a third component of the ANS called the Enteric Nervous System (ENS). The ENS is also known as the “second brain,” because it is just as complex and influential as the grey matter in your skull. Not only does this system control physical and physiological responses to all social interactions, but it also drastically affects mood; 95% of the body’s serotonin is found in the ENS, so if you’re depressed or emotional and eat to feel better, now you know why! If your gut senses that something is wrong, it will affect your conscious decision-making, just as you’ll feel sensations in your gut from any stressful or nerve-wracking situation[3]. For this reason, it’s critical to slow down and make deliberate, conscious decisions when it comes to your eating habits.

Hedonism is the pursuit of pleasure. Hedonic compensation occurs when we feel like we missed an opportunity for pleasure somehow, so we compensate by giving it to ourselves in another way. For Sarah, this is her nightly thought process of, “I’ve had a shitty day and I hate working out, so I’ve earned this wine and ice cream.” It’s part of human nature; when things are going poorly, we eventually reach a tipping point and justify that we deserve something pleasurable. The compounding issue is that if exercise isn’t enjoyable (as is the case for many), you’ll be even more inclined to justify that junk food.

Tying right in with Hedonic Compensation is the difference between intrinsic and extrinsic motivation. Intrinsic motivation is when you want to do something for yourself, because it’s fun, interesting, or rewarding. Extrinsic motivation is when you do something for recognition, validation, or just because “you’re supposed to.” As you can see, Sarah is only extrinsically motivated to go to the gym. She goes because she fears gaining more weight and because it gives her an excuse to eat ice cream. Of course, if Sarah was intrinsically motivated – if she really wanted to go to the gym because it would make her feel better – then she wouldn’t feel like compensating with junk food. If the enjoyment doesn’t come from the activity at hand, you’ll find a way to get your fix elsewhere.

Exercise and mindset are important pieces to the puzzle, but the one common denominator is good eating habits. At the end of the day, it doesn’t matter if you killed it at the gym or sat on your ass–if you’re eating like a garbage disposal, then you’ll look and feel like one too.

Life happens. Carb Backloading is an unbeatable concept because at the core, it is a diet protocol inclusive of the things that the body needs to survive and thrive – dietary fats and protein – while sprinkling in carbohydrate as dictated by energy demands. In Sarah’s case, could there be a better fit? If she works a crazy day with extra hours, it will be more beneficial for her to go straight home, relax, and eat a low-carb meal; her body will respond better to this and she’ll be healthier after a good night’s sleep. However, if she has a good day and makes it to the gym for a rewarding workout, having some stress-free carbs post-workout will serve to build that booty instead of compounding the problem.

No, my friends, fat loss and optimal health are not as easy to come by as most would think. The human body is an incredibly interconnected organism and stress is stress, whether it comes from your boss or a barbell; too much won’t give you a fighting a chance of improving your body composition or health. Take a step back, see if you’re suffering from the same fate as Sarah, and plan your training volume accordingly.