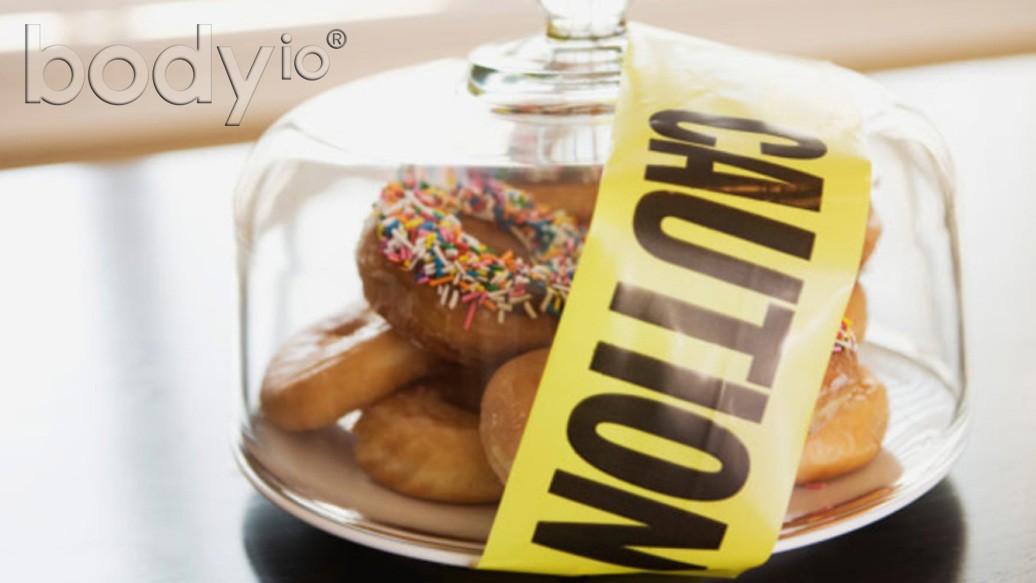 Recently, Caroline Gick shared her experience on HER Body™ podcast about using Carb Nite® and Carb Backloading™ as her diet protocols. Today, she writes a guest post on distinguishing the difference between food allergies and being gluttonous. – Kiefer

Let me start by saying I do recognize that there are people who legitimately suffer from celiac disease and other food allergies and this post is not meant in any way to demean or diminish their plight.

That said, I think we can all agree that the whole gluten intolerance and food allergy issue has gotten a little out of hand, even reaching the point of satire (have you seen the hilarious How to become Gluten Intolerant video?). But I have to admit that I, too, for a brief moment, thought I might be one of the affected masses.

I typically follow the Carb Nite Solution and, at times, Carb Backloading, and have been doing so for almost nine years. This being the case, I don’t have a whole lot of gluten in my diet on a regular basis, but I generally don’t shy away from it on Carb Nites or Back-Loading nights and I usually have some dairy in my diet in the form of heavy whipping cream and cheese. I have had periods of being super disciplined on the diets, particularly during contest prep as a figure competitor, times of being slightly less strict during maintenance periods, and I have also taken my fair share of “breaks” from my diet over the years.

It was on a break after being very strict in contest prep that I experienced my first moment of wonder and weakness, almost succumbing to food allergy victimhood. After months of following a strict protocol getting ready for the NPC Nationals in Miami, I found myself at the Thanksgiving table five days post-show. “How lucky I am,” I thought, “to be off my diet for this most delicious of holidays!” What a feast!

And feast I did…on every morsel of stuffing, roll, and breaded item I could get my hands on. I followed that with the baked goods – pie, cake, cookies – and I’m pretty sure I threw a bowl of ice cream in there somewhere for good measure.

It was delicious. And then it was a disaster. I’ve never been so sick in my life.

I’m not ignorant enough to have turned immediately to the “I must be allergic” argument after such an overdoing, but that was the beginning of my flirtation with it. After I overcame that particular incident and was still experiencing an emotional post-show mentality I decided I wanted to eat “intuitively.” Because I was not in a great place emotionally, “intuitively” meant comfort food and more than my usual share of it. (Full disclosure: I take full responsibility for not following my coach’s guidelines for post-show diet. I had a particularly difficult show and was also going through a challenging time in my personal life. I had a great plan laid out for me, which I chose to ignore.)

I had taken breaks from my diet before and had no problems with gluten or dairy during those times or when eating such foods on Carb Nites or Backloading nights, but suddenly I found myself doubled over in pain whenever I ate anything resembling bread or dairy.

And that’s when it reared its head, the nagging “I must be allergic!” cry. Ignoring for a moment the fact that I am a competitive athlete, know a fair amount about food and diet, have had great coaches who taught me a lot, and am a pretty critical thinker most of the time, the “I’m allergic!” message is so ubiquitous in our society these days, how could I not think that. Truth be told, I think I was actually a little relieved to have a “reason.”

Except, it turns out that wasn’t actually the reason. After investigation, it found out I didn’t actually have any food allergies. And that’s when it occurred to me. I’m not gluten intolerant. I’m just a glutton.

The definition of a glutton is “a person who eats and drinks excessively or voraciously.” Looking back, I can say with complete honesty that on every occasion in which I’ve had a reaction, I have behaved in a gluttonous manner. It’s not that my body is reacting solely to the fact that I’m eating gluten or dairy, it’s that I’m eating it in excessive amounts. Whose fault is that – the food’s or mine?

And therein lies the issue. We’re sometimes too quick to blame our weaknesses on something external and play the victim rather than recognizing our responsibility for controlling the situation. I’m no exception. Somehow, it seemed easier to say that I was unable to eat something because my body wouldn’t tolerate it than to find a way to keep it incorporated in my diet in a way that required a little self-restraint.

I can’t say that I never experience such pains anymore because I’ll admit that the cookies and ice cream do sometimes get the better of me. No, I don’t often eat to excess and I don’t often have reactions, but if I choose to over indulge, I accept what is to come and take responsibility for the reaction or, at the very least, laugh at myself through the pain.

Caroline Gick is a figure competitor, librarian, and the founder of QuarterTurn Clothing™, an upcoming line of ‘real clothes for really fit women’™. After changing her body considerably through strength training, she found that she could no longer find clothes for work that fit and flattered her muscular physique and couldn't find anyone who made them. So…she decided to, not only for herself but the many women who face the same challenge everyday.