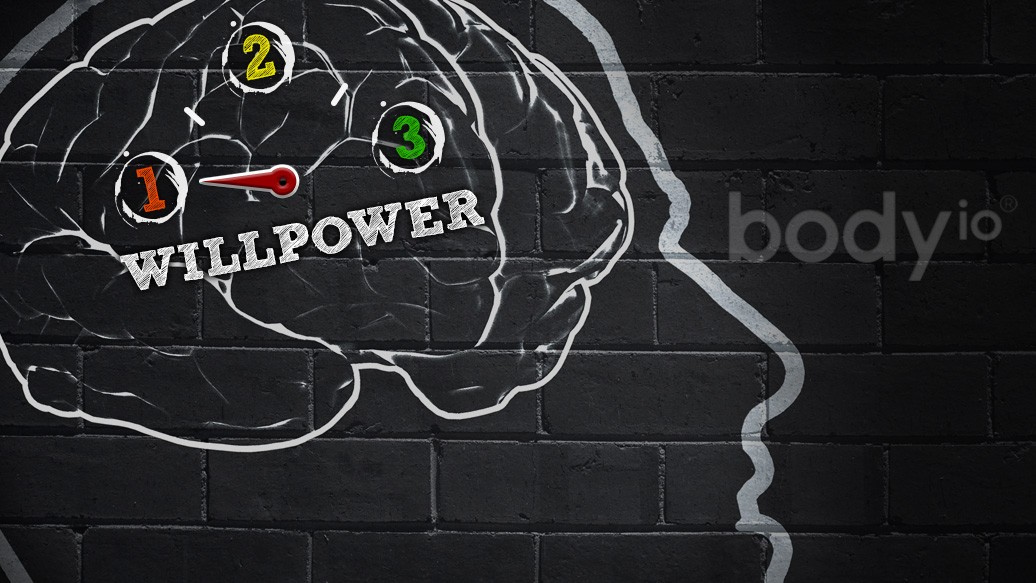 When I was at Paleo f(x) 2015, I participated in a panel discussion focused on willpower[1]. One of the things I said was something like, “We use willpower to try to stop the habits we previously trained the brain to carry out.” This article goes in depth on what I meant and explores a new way to think about willpower—using the backdrop of cognitive neuroscience.

Failures of willpower can manifest in many different situations: Eating, shopping, drinking, work, gambling, or smoking. The question remains: why does willpower fail?

Based on my studies in biopsychology, neuropsychology, and cognitive neuroscience, I believe the failure of willpower is linked to two aspects of the brain: 1) the way the centers in the brain are organized, and 2) the order of how these centers activate in response to stimuli. When I look at the dynamic of how the brain activates in relation to how people typically try to change or adopt a new behavior, I understand that change fails when based on willpower.

If your willpower fails, it is not because you’re weak. When you finish this series, you’ll understand how you can use knowledge of how the brain acts to boost your willpower and succeed.

Christin Grettenberger’s recent article about Mindful Eating fits very well with the topic of this article, especially in the first part where she talks about her automatic habit of heading for the “familiar golden doors” when visiting her parents’ home.

Let me set the scene. You decide that it’s time to lose weight and you therefore decide to adopt a new diet, one that calls for you to cut back or eliminate certain foods that you enjoy and eat frequently. The rules of the diet not only require you to give up certain foods, but also require you to eat new foods or the same foods prepared differently and in smaller proportions. People you recently came in contact with hailed the health benefits of the new diet. After putting off the change for some time, you finally decide to start. You’re excited about the new diet and begin to imagine a new vision of your future.

The first three days of the diet go well, but you’re starting to get tired of going to bed still feeling hungry. By the fourth day, you’re craving the foods you gave up, especially the late-night cookies. You go shopping and somehow the cookies are in your shopping cart on the way out. In other words, willpower failed. That night, you go to sleep with cookie crumbs on your pillow. Willpower failed again. The next day, you have a spat with a friend, and an hour later you’re buying fast food. For the next month, you start each morning intending to stick to the diet, but by the evening the old pattern takes over.

The Failure of Willpower

Cognitive neuroscience is the study of how the brain behaves in the performance of certain tasks. Cognitive neuroscience research has shown that certain parts of the brain are active at different times during the execution of certain behaviors, such as reading, speaking, hearing, or acting on habits. The followin gresearch sheds some light on the problem of, willpower and attempts to explainwhy it fails.

The picture showing the brain sliced in half (sagittal view) will increase your understanding of this article. 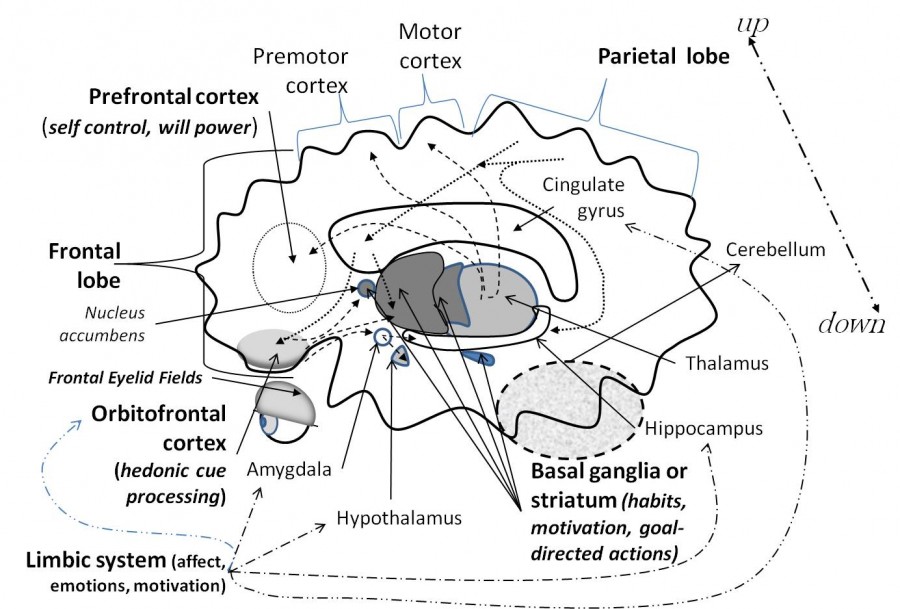 While all regions of our brain continuously interact and work together, the labeled areas in the picture are generally associated with the specific functions that are relevant to willpower.

If the prefrontal cortex is the driver of the car, then the basal ganglia form the engine in many ways. The processing of reward, the hedonic (pleasurable) value of an object or situation, the storage of habits, and goal-directed actions occur in the centers collectively called the basal ganglia[8,9]. Two centers in the basal ganglia relevant to the failure of self-control are the nucleus accumbens and substantia nigra. The nucleus accumbens encodes the reward value of cues or objects in the environment based on past experience[10,11]. The substantia nigra, through its production of the neurotransmitter dopamine[12], tells the brain how important it is to obtain a reward[13]. The basal ganglia play a role in determining which goal-directed actions and habits are activated based on cues associated with reward in the environment[14,15]. The thing to keep in mind is that the habit-related goal-directed actions encoded in the basal ganglia are learned over time due to repeated reinforcement. In other words, the greater the reward, whether pleasure or escape from physical or psychological pain, the more likely a habit will be motivated. The action or behavior that the prefrontal cortex selects at any moment is strongly influenced by information about priorities and the behavioral routines provided by the basal ganglia.

We always have goal-relevant intentions within the basal ganglia that are activated in the background. Based on what is going on in the environment and the situation relative to the opportunity for reward, the basal ganglia will bias attention, activate motivation, and initiate goal-directed and habitual routines to obtain those rewards. A number of goal-directed actions may be initiated along with the habitual routines that serve them.