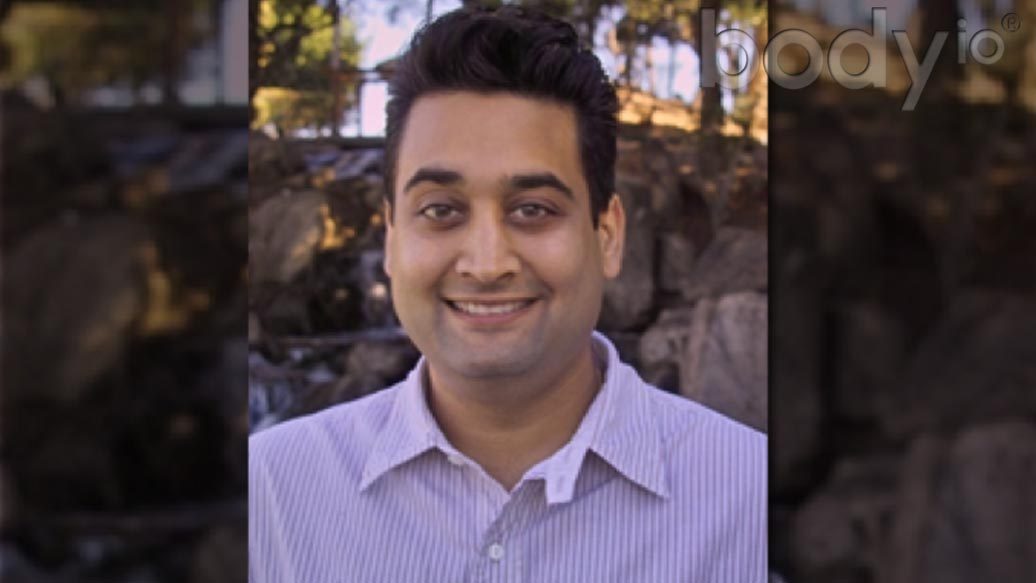 “I want input and contributions from medical professionals on this site, but after talking to Rocky Patel on numerous occasions, it was obvious to me that I wanted him in particular. He’s pretty much unlike every family practitioner I’ve ever met, both in terms of his knowledge level and his intellectual curiosity, but also because he’s willing to go against the grain in order to find the truth for his patients. He’s got a lot to say about nutrition, preventative medicine, and the medical industry itself, and he’s a phenomenal addition to Body IO.” — Kiefer

BIO: Let us start with an introduction. Give us a little background on you and your practice.

Rocky Patel: I’m a board certified family physician in Arizona. I have a medical practice where I see patients of all types—from newborns to the elderly. I also previously was the chief medical officer of a separate business called Heart Fit for Duty, where we assess first responders—military, fire, police, and EMS—for cardiometabolic risk. We know that first responders have a significantly high risk of cardiovascular disease, and with firefighters, for example, that’s usually on the way to the call, at the call, or on the way back on the truck where the majority of the events occur. We take a special interest in that population and try to treat them more aggressively.

BIO: Beyond the obvious, why is their risk level so high?

Rocky Patel: It’s multi-factorial. Definitely stress is a huge factor because you’re having this huge sympathetic outflow when you hear the call. There are shift work issues as well, so that’s another factor—the circadian rhythm. Then there’s the notion that it’s also due to insulin resistance, too, which is almost a plague on our entire society, not just first responders. You’ve got a first responder population where a lot of them also have insulin resistance, so you throw all of that into the soup, and it’s kind of like a recipe for disaster sometimes when you’re asked to go a hundred miles a minute, and then you’re down again in a repetitive way that happens again and again.

K: What kinds of preventative measures do you take with them?

Rocky Patel: We’ve found some really good use with heart rate variability, actually, so we’ve had some guys that use it to really decrease their stress and help them control their anxiety. Some other things we do are biofeedback, which kind of goes along with heart rate variability—and then just trying to do relaxation techniques and things like that. Obviously if they have any type of mental issue like anxiety or depression, we try to address those issues as well, with counseling—or, if it’s really severe, with supplements or drugs.

BIO: How did Kiefer come into the picture?

Rocky Patel: I came across Kiefer’s stuff through the amazing world of Twitter. I think Dave Asprey actually tweeted out the link to Carb Backloading when it first came out. I downloaded the book and read it, and it had some amazing references. It really made sense in terms of trying to close the loop with what I want to do with my patients. I’d estimate that 70 to 80 percent of patients coming through my door have some form of insulin resistance. People might say I’m overestimating that, but based on what we do in terms of testing, that’s what I see.

BIO: What do you do with those people?

Rocky Patel: Using a low carbohydrate approach with these patients seems to give you the maximum return on investment, so to speak. It gives the patient the best chance to stay off medication, or to at least reduce the medication burden. It’s interesting how many different voices there are online in terms of ketogenic diets, or a ketosis plan, and I’ve always found these intriguing. I don’t vilify one macronutrient or another, and when I read Kiefer’s work it really justified the notion that every macronutrient has its purpose. The problem is either the timing or the amount. With a general population, the amount is large and the timing is unlimited, so that’s the issue we’re dealing with.

BIO: Which plans have you found to be the most useful?

Rocky Patel: As soon as I read CBL, I also read The Carb Nite Solution and found some really good plans. For me, my population is more of a CNS population than it is CBL, but when we look at our first responders, a lot of those guys are CBL people because they’re already pretty lean and fit, and they want to enhance their performance. Either way, I think they’re great tools to get people leaner and to get them more healthy. For the first responders, we look at them as athletes. That’s what they need to be, because it’s a public safety issue. If they’re not healthy, we’re not safe.

That’s kind of how we use the plans, but not everyone is going to be able to do it because they’re not willing to make the restrictive changes it takes. We use CNS principles to slowly wean people down, and when they’re at a point where they think they can do it, we can transition them to the full plan.

BIO: What are you working on right now?

Rocky Patel: In general, from a Heart Fit for Duty point of view, we believe our model can go national. It’s just a matter of how we can do it, and how we can get it covered on these different plans. That’s really the biggest issue, because we’re looking at a population that doesn’t have a lot of financial resources, so everything we do is usually through an insurance-based model. To go to other states, we either have to find a provider there that can bill for us, or I have to get licensed in other states, which can be really prohibitive.

In terms of an overall game plan, I’d like to really just kind of show people how metabolically deranged you can be and still look and feel really good. The crux of the message is that you can look and feel great on the outside while you’re a train wreck on the inside—and in using some of these principles that Kiefer talks about, you can actually correct all of that.

BIO: What kind of public role do you see yourself taking on as you start to get more followers?

Rocky Patel: I just want to be a resource for people. The problem is that I like to give people a point of view that their doctor is likely not going to give them, because the things I recommend are completely outside the box, and completely contradictory to what most medical people are going to tell you to do.

BIO: Why is that?

Rocky Patel: Because what most medical people are telling you is wrong information. The patient is the boss. They’re the consumer, so if they’re not getting results from their physician or their trainer or health coach, they need to find someone who will help them get those results. I think we need to look at the science from an academic standpoint and see where it’s going, but unfortunately, most of the decisions being made right now are being done on policy and not science.

BIO: It seems weird that the information we are getting is so contradictory. Why is it like that?

Rocky Patel: Number one, doctors don’t get a lot of nutritional information in medical school. Number two, we’re interested in treating patients, and we’ve been trained, to a certain degree, to do that with medicine or procedures. A lot of this is a foreign concept—or we accept blindly what we’ve been told. We accept the diet recommendations of the American Heart Association and the American Diabetic Association, but nobody has thought about asking where these recommendations came from. Again, a lot of this is based on policy, and trying to keep people out of trouble.

Let’s say you’re the American Diabetic Association, and you recommend a low carbohydrate approach. Well, potentially, you could put people at risk of having hypoglycemia, so it’s kind of like, let’s not recommend the chance to cure someone. Let’s recommend something that will keep people from dying in the short term.

Rocky Patel: As a practitioner, we have a problem with the way medicine is reimbursed in this country. Right now it’s reimbursed on volume, so the more people I can shove through my door, the better I’m going to meet my overhead, pay my staff, and take a salary home. That doesn’t really lend itself for doctors to go out there and read books, go to conferences, or learn about stuff they didn’t get in medical school or residency. I think it’s a huge problem.

BIO: Do you think it is ironic, then, that you are getting a lot of this information from rather unconventional sources?

Rocky Patel: If you look at Kiefer’s books, they’re so well-cited. There are so many citations. It’s not like Richard Simmons wrote them. This is something that’s based on fact and science, so it doesn’t matter where the book itself came from.

It’s quite ironic. For me it was a personal journey, too, because I have a big family history of heart disease and diabetes, and I was certainly going down that road myself, having been 5’10” and 260 pounds (which I’ve lost). Maybe that’s why I’m different from a lot of doctors I see that either don’t really care, or they’re really out of shape without realizing it. For me, if I’m struggling with it, I can imagine what patients are dealing with.

Name the low carbohydrate book, and I’ve probably read it. What I’ve found intriguing is the palatability issue of still craving the foods you want to have. I think one of the really brilliant things about Kiefer’s plans is that they allow you to eat crap, in a sense, if that’s the way you want to go. But it’s a measured and timed amount of crap—and that lends itself to compliance. You can get people to be more compliant. The compliance issue is going to be more extreme during the ultra-low carb days, but again, we work with patients on many different levels and try to get them down to where they feel comfortable.

BIO: So why is all this stuff still so well-disguised in terms of getting the right information out to the public?

Rocky Patel: I think there are some that are out there doing this. They all kind of dance around these issues. It depends what your goals are, so that’s a big thing to look at. Like Kiefer always says: “It depends.” I think you can use a lot of variations, but for me and my patients, we want to be the leanest, best-performing people we can be. One of the things I like about Kiefer’s programs is that they allow you to do that. They give you the most flexible way of doing it, and flexibility improves compliance. When you say something rigid, people will be doing something completely different within a week. There are other people out there, but they’re few and far between. These things get labeled as fads, and that comes back to policy and what’s driving a lot of the stuff that’s coming out in the media. I don’t want to start talking conspiracy theories, but that’s pretty much what the problem is.