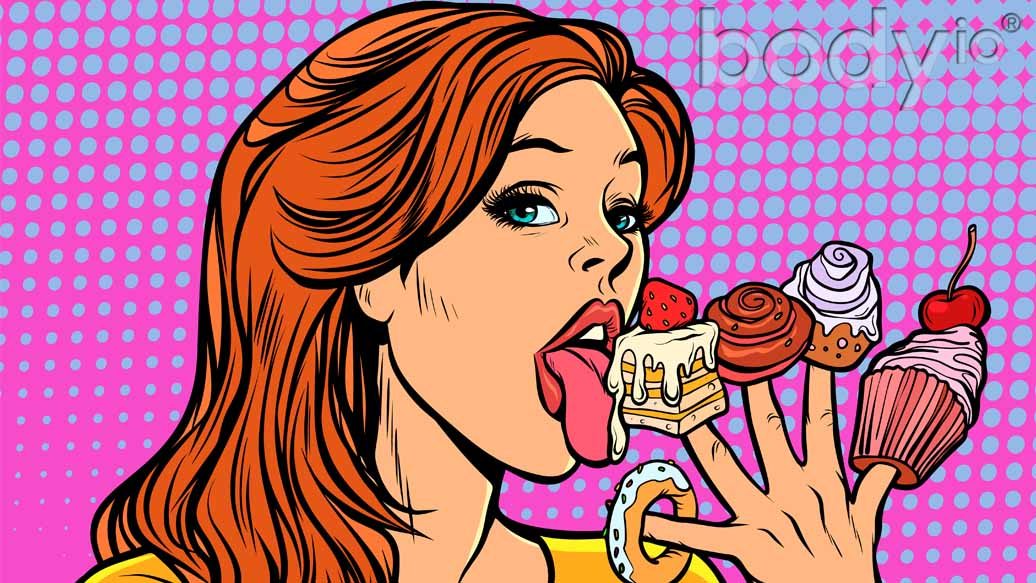 assumed I hallucinated the whole thing. I sat listening to an account of a woman, married about two years, someone I know. Suffering from weight issues and multiple failed attempts to lose body fat, she adopted an Intuitive Eating plan, popularized by writer Kelsey Miller. To my acquaintance, eating intuitively meant cookies with a large Frappuccino for breakfast, pizza for lunch and a nice dinner with wine, and on several nights per week, her intuition provoked a need for several beers at a local bar before retiring to bed.

As the chronicle of photos of the founder of the Anti-Diet movement demonstrate, she gained massive amounts of body fat as did my acquaintance. I saw snapshots of this transformation first hand. Despite increasing amounts of chronic pain, an inability to spend time outdoors and an ever growing chasm between her husband and several close friends, she claimed she felt empowered and happy because she no longer worried about food or her spiraling body weight. She was finally free to be healthy, both physically and emotionally, at any weight.

None of this surprised me. These attitudes and denials, I expected. I even expected her development of facial hair and other problems associated with shifting sex hormones that occur when people cross a certain threshold of body fat. I wasn’t even surprised when she had trouble attempting to bear children. Volumes of documentation exist which confirm this standard as one progresses into the stratosphere of morbid obesity. We use the term “morbid” because at a certain point, several diseases go from probable to certain.

What I thought I imagined was the rage she displayed after visiting her doctor about her difficulty becoming pregnant. The doctor had explained to her that her hormonal imbalances caused by her obesity and her pre-diabetes shared the blame. The solution: lose weight. As she told the story, the seething behind her eyes seemed palpable, but I had to be imaging it, right? She had a problem, her doctor presented a solution and a rational decision followed: lose weight to become healthy enough to bear children or don’t. No one foisted anything unreasonable upon her. The burden was hers alone to accept or reject.

What I saw was real. She was livid. Her Facebook began filling up with vitriolic messages about the audacity of her doctor to suggest she lose weight. The doctor (a woman) should respect her obesi-health and provide fertility drugs. Who was she anyway to use her thin-privilege to suggest that morbid obesity is, well, in a nutshell, morbid?

This became a recurring theme in her social media posts, this thin privilege, and represents my first exposure to the term. She went on an active campaign of shaming her friends every time they posted pictures of themselves at events or in nature and unleashed a near libelous deluge of insults when they posted about their workouts. Luckily, I only had to deal with this campaign of thin-shaming at a distance. And years later, she’s still at it (and still blames her doctor for her inability to have children, describing the doctor, at one point, as an Anti-Fat Nazi).

I hadn’t thought much about it until recently after the BBC released a video of a super-obese woman (which is a level beyond morbid obesity), explaining thin privilege. The woman complained that thin people get to eat donuts without people staring. Following this thread leads to a plethora of thin-shaming, a weird attempt at some type of social justice. Though I normally shy away from expletives, even within my inner monologues, I couldn’t help but think, WHAT – THE – FUCK? There’s a word in Urban Dictionary to describe such polemic attempts by the obese to shame thin people while explaining that the “morbid” in “morbid obesity” somehow means “imaginary health”: Fatsplaining.

When did hard work, dedication and perseverance become something worth shaming? The vast majority of lean, healthy people commit a lot of fortitude and tenacity toward achieving their goals. And an even greater number of people work even harder to become lean and healthy. Why would anyone shame this? Where is the justice in doing so? Did someone walk up and smack the donut from the super-obese fatsplainer’s hand while saying, “You don’t need that!” No. In the fatsplaining video, no one paid her any mind as she enjoyed the oversized, icing encrusted donut in the midday sun. So why be angry at the people who didn’t buy a donut?

Believe it or not, I’ve expended a lot of thought on these issues. The underlying context here is crucial. No one defends the horrid trend in secondary school today when students from low socioeconomic groups shame their peers for studying and achieving high grades. This phenomenon — shaming hard work and dedication — has led directly to falling rates of minority enrollment in college. Would fatsplainers jump to the cause of those who want to bring others down simply to justify their own apathy towards academics? I doubt it.

I’m not denigrating the plight of those with weight issues. I sympathize. Our society, with its myopic focus on weight loss, caused these issues by enforcing the use of programs that make people more sick when they do lose weight. The result: the weight loss is physiologically impossible to maintain and they gain more weight after ceasing the diet. The acquaintance of whom I spoke above experienced her greatest fat loss while on a strict vegan diet while running half marathons. But her health broke down and she had to quit the program. Afterwards, she experienced the most rapid weight gain of her life, ending up in a state of compromised health where getting lean became impossible with using the standard methods of calories-in-calories-out.

We have, as a society, left these people behind. We should all feel some level of guilt for this. It’s a complex problem. Solutions do exist, but thin-shaming and fatsplaining is nowhere in the rubric of progress; neither is fat-shaming. Desperation, despondency and defeat beget thin-shaming and fatsplaining. In no other context does “giving up” represent a virtue. But it does when we discuss the obesity issue.

My incessant harping on the lack of scientific rigor in the field of health, fat loss and athletic performance and my tenacious struggle to develop one stems from true compassion. I believe it’s a human right to live as one wishes, whether diseased and obese or healthy and lean. As a corollary, however, it is society’s responsibility — our collective responsibility — to develop a mature science that achieves health in an easy and accessible manner, a method independent and outside of medicalized healthcare.

In this, I include the responsibility to our athletes as well who are normally lean, but the diet and training that produces high-level performance often damages their body and once they leave the limelight, no one cares what happens to them, as many battle weight issues indefinitely, especially of they abandon athletic pursuits.

We cannot continue on this path and we absolutely cannot give in to cries of kindness to defend the acceptance of skyrocketing rates of obesity. Is it kind to relegate a person to debilitating disease, chronic pain and an early death?

The battle to develop and spread a working science of health with unmitigated tenacity is the real challenge we all face in this still nascent century. Fatsplaining as a proxy for the acceptance and celebration of giving up and thereby subjecting people to harrowing disease is not an option. Kindness does not mean ignoring the problem. True kindness stems from a willingness to listen, the integrity to be honest, the courage to spurn social pressure and the compassion to never give up on helping people escape from debilitating morbidity.

It’s time we all display the bravery inherent in being kind.