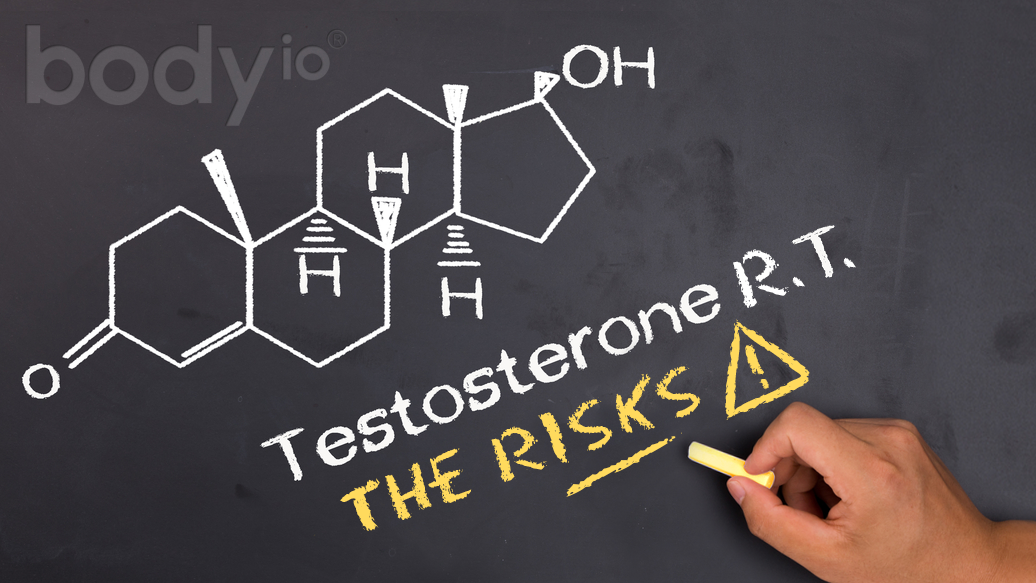 here is a great deal of confusion about testosterone replacement therapy and whether or not people should use it. On the one hand, companies promote it to consumers as if it will solve many of their problems, but on the other, you’ll often see ads from attorneys for people who want to sue certain TRT manufacturers. After reading Part 1 of this series, you’ll know more about the basics of testosterone replacement therapy (TRT), including dosage, administration, bioidentical hormones, muscle growth, aromatization side effects, and inhibitors. Part 2 shares the potential risks associated with TRT.

TRT has been associated with a number of risks, including increased acne, water retention, more frequent urination, increase in breast tissue, and minor shrinkage of the testicles[1]. Some of the more serious risks of TRT include potential development of prostate cancer, liver toxicity, hyperviscosity (thick blood), erythrocytosis (increase in the total red cells), the worsening of untreated sleep apnea, and severe heart failure[2]. A 2013 study identified the risks of TRT for a number of conditions per 1000 people[3].

This table helps to put the risk into perspective. I’ll discuss more about this later in the article.

TRT and Risk of Cardiac Events and Stroke

At the beginning of this article, I mentioned how lawyers are offering to help people who have been prescribed TRT in cases of heart attack or stroke. The relationship between TRT and adverse heart-related outcomes has received the most attention. Concern about this risk was raised by a number of recent studies.

A 2010 study investigated the adverse effects of using transdermal testosterone gel among 209 65-year-old men with low testosterone and high levels of hypertension, diabetes, hyperlipidemia, and obesity. The study had to be stopped due to the high rate of cardiovascular-related events among the group on TRT (25 cases), as compared to the placebo group (5 cases)[4].This study was also highly publicized.

A second 2013 study found that 1,223 veterans who started testosterone therapy (method of administration not specified) after a coronary angiography had a 5.8% higher rate of heart attacks (myocardial infarctions) than the veterans not receiving TRT did[5]. The risk of adverse heart issues wasn’t as bad as in the first study, but concerns at the federal level were still raised.

The third study from 2014 was much broader in scope and compared the rate of non-fatal heart attacks among a sample of 55,593 men before and three months after filling a prescription for TRT at least once (method of administration unidentified). The study found that heart attacks occurred at a rate of 1.17 per 1000 patient years among men under 65 years old and at a rate of 2.19 per 1000 patient years for men over 65. The authors still concluded that TRT “substantially” increased the risk of heart attack and contributed to a twofold increase in the risk of heart attack among men 65 and older[6]. As a result, the FDA started requiring all testosterone replacement therapy product makers to note the increased risk of heart attack and stroke on the their product labels[7].

Even so, the risk of heart-related risk from TRT remains unclear. A 2014 study also looked at the risk of heart attacks in a population-based cohort of older men receiving TRT via intramuscular injections (not transdermal gel, orally, or other non-injectable methods). In this study, 6,355 patients treated with at least one injection were compared to a sample of non-users and followed for eight years (as opposed to a few months). The study found that testosterone therapy solely using the injectable mode of administration was not associated with an increased risk of heart attacks. In fact, a comparison of the heart attack rates among TRT users and non-users led the researcher to suggest that TRT appears to have a protective effect against heart attacks, particularly among older men at higher risk for it suffering an infarction[10].

Comparing the first three studies to this latter study suggested a possible relationship between the method of administering TRT and the risk of heart-related issues. This was clarified in a second 2014 study. This study examined and compared the risk of cardiovascular events when TRT was administered orally, via transdermal gel, and by intramuscular injection. The study found that TRT taken orally was associated with an increased risk of cardiovascular events, while TRT administered via intramuscular injection or transdermal gel was not. Thus, the risk of adverse heart-related outcomes is tied to the method of administering TRT, not the TRT itself.

TRT relative to the risk of heart attacks appears to be associated with how TRT is administered; testosterone injections or transdermal administration appear to be the safest methods.

However, I have an issue with the strong focus on risk. Let’s say that among men over 65 on TRT, two will suffer a heart attack for every 1000 using the therapy, as reported in the 2013 study above. Can’t we also say that 998 of every 1000 men aged 65 and over on TRT will not suffer from heart-related issues? It is important to look beyond the negative aspects at times, as it can potentially blow “risk” out of proportion. The truth is that despite TRT contributing in some small way to the risk of heart attack, the vast majority of men put on TRT never suffer any heart-related issues: 99.8% of older men on TRT receive the benefits with very little downside.

Past research has reported a connection between worsening symptoms of obstructive sleep apnea (OSA) following the start of TRT, especially in obese men[15]. As a result, TRT has generally been withheld from obese men with the condition. However, recent research examining the time course of TRT influences on OSA has shown that the adverse effect on OSA only occurs at the beginning of the therapy; it lessens dramatically after several weeks[16,17].

Part 3 of this series will address the many benefits of TRT.