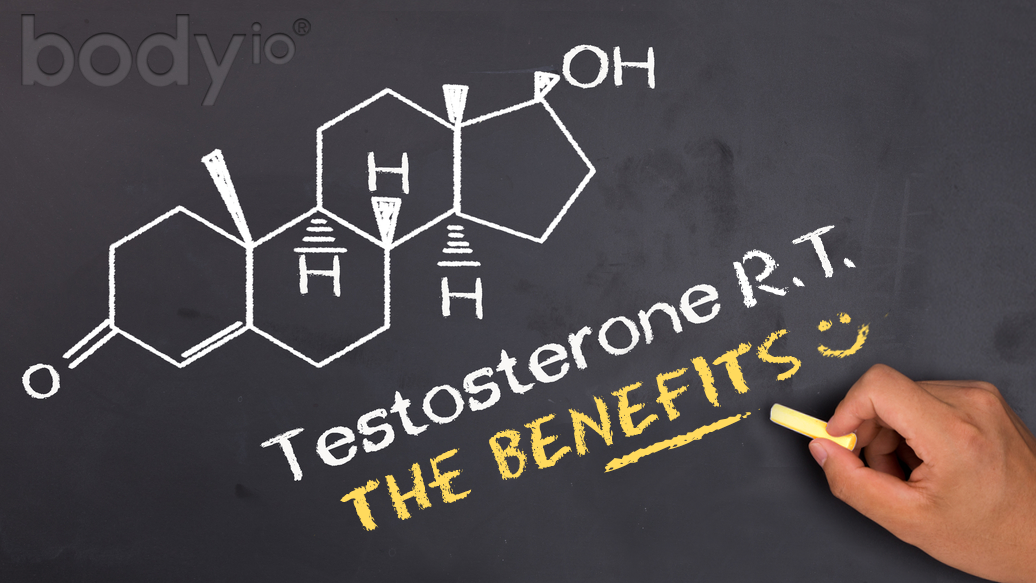 ecent research has highlighted some benefits of testosterone replacement therapy (TRT) for both men and women. Part 1 of this series covered the basics of TRT and Part 2 covered the potential for risks.

The primary potential benefit of TRT for women is related to improved libido and sexual functioning after menopause. While the FDA has not approved the use of TRT for this purpose, a number of studies have shown a positive benefit to sexual functioning among post-menopausal women not currently taking estrogen[1-4] without an increased risk of endometrial or breast cancer[5].

TRT in small doses (0.5 mg per day) has been reported as beneficial for menopausal women in a number of ways, including protection of the heart, improved mental alertness, improved bone strength and density through improved calcium retention, improved overall feeling of well-being, energy level, and muscle tone[6].

Sarcopenia is a phenomenon of aging characterized by the loss of muscle mass and strength. Disability, an impaired ability to cope with the stress of a major illness, and mortality are all outcomes of sarcopenia[7]. Sarcopenia also includes the loss of bone mass, which contributes to frailty and disability[8], as well as obesity[9]. In the year 2000, sarcopenia was linked to $18.5 billion in healthcare costs, representing 1.5% of total U. S. healthcare expenditures[10].

Because of testosterone’s contribution to muscle growth and the association of Low T with muscle loss, a 2009 study specifically investigated treating sarcopenia in aging men with TRT. The study found that TRT contributed to a significant increase in total and lean muscle mass, endurance, and loss of body fat[11]. This research supports the potential use of TRT as a treatment for sarcopenia.

Atherosclerosis- hardening and narrowing of the arteries –can lead to restricted blood flow to the heart (ischemia) and heart attacks[12]. Atherosclerosis occurs in conjunction with a number of associated conditions (high blood pressure, high blood sugar level, excess body fat, and abnormal cholesterol levels) that contribute to the increased risk of heart disease, Type 2 diabetes, and erectile dysfunction.

All of these conditions have been associated with low testosterone, pointing to the possibility of treating all of them with TRT[13]. This was tested in 2009 using a randomized group-controlled trial. In this trial, a sample of men with low testosterone received TRT, while the men in the control group received a placebo. Later comparison of the groups showed that men receiving TRT benefitted from reduced levels of atherosclerosis and ischemia as compared to the control group[14]. This study supports the use and benefit of TRT in the treatment of atherosclerosis.

Research has shown a link between hypogonadal-associated Low T, Type 2 diabetes[15,16] and subsequent early mortality. This has led to the belief that TRT might be an effective treatment to reduce mortality among those with Low T who are suffering from Type 2 diabetes. This was effectively demonstrated in a 2013 study. In a sample of men with Type 2 diabetes, the prior rate of mortality was 17.2%. The researchers randomly assigned the men to two groups: one treated with TRT using transdermal gel and the other treated with a placebo. The men were followed over a period of three and a half years. Analysis later showed that the group treated with TRT had a reduced rate of mortality of 8.4%, while the placebo group had a mortality rate of 19.2%. The researchers concluded that TRT may improve survival rates of men with Type 2 diabetes suffering from Low T[17].

A number of studies evaluated the benefits of TRT to outcomes associated with Type 2 diabetes and/or metabolic syndrome. This first study examined TRT effects on insulin resistance and lipoprotein levels over a 12-month period in a sample of men with Type 2 diabetes and Low T and compared them to a placebo group. Among the group treated with TRT, glycemic control was greatly improved, as indicated by reduced hemoglobin A1C, along with improved total and LDL cholesterol, body composition, libido, and sexual function. In addition, no significant differences between the TRT or control groups were found in the incidence or severity of adverse events[18]. Similar results were demonstrated in a 2011 study[19].

Two years earlier, metabolic syndrome and Type 2 diabetes symptoms were reversed over 52 weeks through treatment with TRT, along with improved diet and exercise, as compared to a group treated with diet and exercise alone[20].

This article series offered a review of testosterone replacement therapy with a focus on its risks and benefits. In Part 1, the basics of the therapy were described, while Part 2 addressed the risks associated with testosterone replacement therapy. In addressing TRT risk, I made a particular effort to spell out how those risks are defined, namely how much attention is given to the downside risk instead of the much larger upside benefit. I also described research that brought the actual severity of this therapy’s risk relative to things like heart attack, prostate cancer, and sleep apnea into question. Finally, Part 3 dealt with the benefits of testosterone replacement therapy, highlighting benefits to women and to the treatment of growing health concerns, including sarcopenia, atherosclerosis, Type 2 diabetes, and metabolic syndrome. Part 3 also touched on the benefits of TRT when combined with exercise and resistance training.

Based on my review of the research and the facts available, I believe that TRT has the potential to improve health and quality of life among aging men and women with very little downside risk.

I am convinced that the risk of TRT has been significantly overblown. For every man suffering from an adverse consequence of TRT, there are many hundreds more who experience no problems at all.

As I get older, I’m encouraged by the promise and ongoing improvement of TRT.