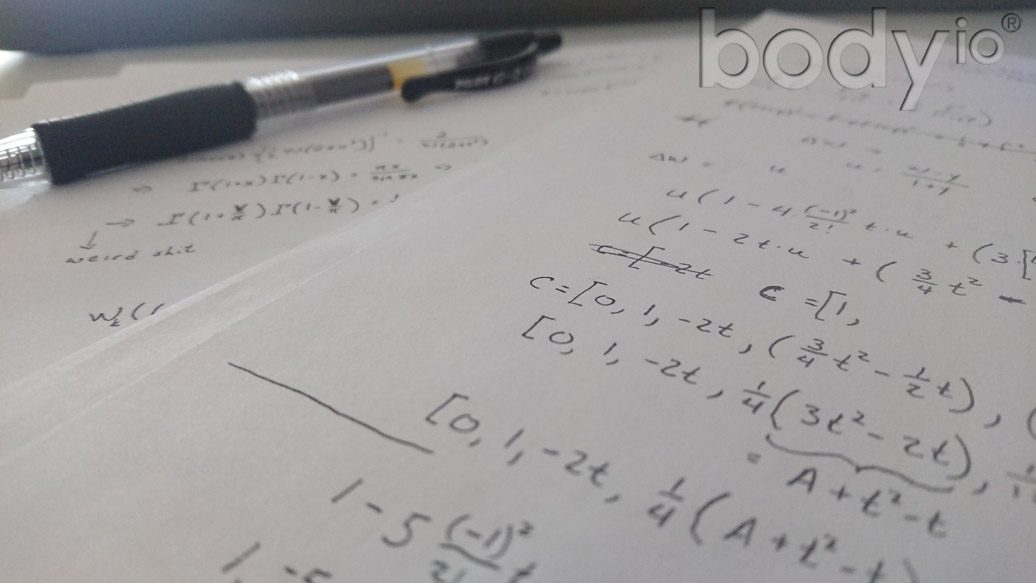 et’s stop pretending. Let’s just, for once, be honest. Health Science represents a one-hundred year long failure. And it keeps getting worse. Today we fail to produce any credible, scientific definition of health, and therefore fail to achieve it, while becoming shamefully, disgustingly efficient at manufacturing the opposite: human disease.

How did we end up in such an asinine oxymoron of a world?

What happened to Health Science that allowed this unscrupulous marketplace of disease to thrive unabated? Put more succinctly:

Why hasn’t Health Science made us healthy?

If somewhere in the unexplored caverns beneath Cairo lurks the mythical sphinx, this would be its riddle. The longer we go without answering it, the greater the sanguinary wrath borne of our ignorance, paid for with three trillion dollars worth of suffering each year.

Maybe I seem melodramatic. A few years ago, I would have agreed. Around that time, however, I began considering what it was I was doing. I’m not a geek or a nerd—those who do science vicariously by reading the work of experts (of whom I have no complaints, nor hold any ill will)—I am, and have always identified as a scientist.

I get my hands dirty. I spend the hours upon hours, day after day, sometimes month after month trying to formulate the answer to intractable questions. It’s just who I am. The frenzied intoxication that infects me when gripped by a tantalizing puzzle, culminating in a solution both brilliant and embarrassing (because it seems so simple in retrospect) brings me one step closer to nirvana or moksha or enlightenment or whatever one might choose to call the divine.

A couple years ago, I had to take a step back and ask myself a question about my work in human health and performance: Am I doing science? This turned out to be a tricky question, one I couldn’t answer straight away because something fundamental eluded me, which I hadn’t realized. I first had to move one step down the epistemological ladder to a more penetrating and useful question: Do I know what Science is?

I can’t figure out if I’m ‘doing Science’ if I have no idea what Science means as a process. I had never considered the question…ever. We can take a pop culture version of this conundrum from the movie The Martian: Was I sciencing the shit out of growing potatoes on Mars, or simply shitting on potatoes?

Despite being a scientist for the better part of my life—whether it was studying Josephson junctions as an undergraduate (the physical underpinnings of a quantum computer), tackling alternative theories of quantum gravity (for which I got black balled in my physics department), analyzing the thermodynamics of a transformative piece of technology, or solving efficiency issues in computational algorithms—I never stopped to ask…

This might seem like a weird question and, depending on your philosophical slant, one with an impossible answer or an impossibly simple answer. Neither is the case, although it leans more toward the impossible than the simple.

The definition of science is couched in culture and therefore changes, which makes consulting the masters of thinking across the generations a difficult way to come to an answer. Countless people have grappled with this question: Immanuel Kant, Bertrand Russell, Karl Popper, Albert Einstein; Wittgenstein, Wagner, Feyerabend, Fermi, Hume, Hempel and the most influential of the 20th century, Thomas Kuhn (he’s the guy who spawned the phrase, ‘paradigm shift’). Until this question occurred to me, I identified science using the same method employed by Justice Potter Stewart to identify ‘hard-core pornography’: I know it when I see it (1).

Although this may seem like some strange metaphysical meandering on my part, the question—and not having an answer—affected me in a profound way, almost to the point of crisis. As many of you know, I disappeared, and I did so to deal with this problem, learning from the intellectual giants on whose shoulders I might dare stand.

To me, this journey was a moral imperative. I feel a deep sense of responsibility to those who follow my work. I am providing information that can change someone’s life…for better or, if I’m not careful, for worse. I hold myself culpable for both. But how could I know I helped the hundreds of thousands of people (and yes, it’s been that many) by making them healthier, and didn’t accidentally lead them toward greater illness yet to come, hiding the progress of disease beneath a leaner exterior, a faster mile or a bigger bench press?

I didn’t. I couldn’t go on not knowing.

Why has Health Science failed us so miserably? I realized it’s a trick question. Health Science doesn’t exist and never has. We have had no guide to lead us; we’re blind travelers groping around in a tortuous landscape. It’s our fault for trusting in something that didn’t exist.

Don’t misunderstand. I’m not saying that scientific knowledge about the human body stalled. It didn’t. In fields like microbiology—spawned by the discovery of DNA—science progressed rapidly over the last forty years, and still progresses. Mitochondrial research advanced; the mechanics of physiology advanced; endocrinology advanced; food science advanced; knowledge of the gut microbiome advanced. No one can deny that the deluge of facts and insights bewilders even the most avid and dedicated researcher—trust me, I’m one of them.

The field of Health Science, however, subsumes all of these fields. Each of these fields provides the content (the facts, the data) needed to develop a Health Science. Epidemiological results—which I label Statistical Observational Data Analyses (SODAs) so as not to confuse them with more comprehensive studies—create important data. DNA analysis and correlation gives critical information. Isolated population studies reveal puzzle pieces. Even the results of pharmaceutical research, trials and SODAs provide indispensible data for the birth of a Health Science.

Health Science, therefore, is in a unique state, one with no modern historical precedent. Health Science is not yet a Science, it is a massive and overwhelming collection of facts (even correlations are facts). But this is the beauty and the blessing of our time: the true content of science is always the data—the data doesn’t change. The theories do.

Theories evolve (or are discarded for new theories) to fit an ever growing collection of data. This is why Newton’s laws of physics for large bodies gave way to General Relativity, which gave us GPS. And Newtonian mechanics fell apart in the world of the microscopic, leading to the advent of Quantum Mechanics. But both these theories still fit with our experience of the world, but also succeed in describing the parts of reality we can’t experience directly.

But Health Science has no theories (and before you object to this, read on). We get to start from scratch. The birth of no other science in history benefited from such comprehensive data as we now have for Health, from the molecular mechanics of DNA to emergent behavioral effects of entire societies. We just need to do something with all this data.

So Much Data, So Little Wisdom.

With a deluge of information that has no innate or obvious blueprint, we—and I mean all of us in this field—fashion theories around one or two key ideas. And there’s no shortage of material, from ancestral theories, to complicated recipes for food interactions, to environmental arguments, to the evergreen idea of it-comes-from-nature-so-it-must-be-good, to the oversimplified calories-in-calories-out and the ever popular Insulin Hypothesis.

People tend to choose the theory that best fits their narrative background and in the process, since there’s no fundamental Science to fall back on, the originating idea must be taken as fact despite being anything but. For me, the narrative is personal. I tried almost everything to lose my body fat, all of which failed. I stopped eating carbs and suddenly, I became lean with little effort.

Both my protocols work surprisingly well for fat loss, or lean muscle building, but that’s not important. What is important is that I couldn’t say what else my protocols might be doing because dogma supports both, not science. The idea central to my work is the Insulin Hypothesis: that insulin makes people fat. Because all my work revolved around that single idea, I treated it as an incontrovertibly true idea. I had to be dogmatic because everything fell apart without that central tenant.

There is no one hawking a diet, fitness or health plan today that isn’t doing the same thing. Maybe their background is in mitochondrial research, so anything that causes less mitochondrial damage is taken as a “truth” that the same diet can somehow fix mitochondrial damage (although this doesn’t logically follow and is profoundly naive.) Maybe they stopped eating junk food, switched to “natural” foods and felt better, therefore the idea that a “natural food” diet makes one healthy must be “true”. Maybe someone starved themselves and did twenty hours of exercise per week to lose weight; very quickly, calories-in-calories-out becomes “true”.

Someone even, supposedly, sucked on a yak’s teat in the Himalayas while drinking mycotoxin-free coffee (that almost assuredly wasn’t free of mycotoxins) and lost weight—even developing a six-pack of abs—and suddenly butter from grass fed cows added to coffee became a magic elixir of “truth” (they, of course, didn’t consider that it might be the calorie deprivation, testosterone injections, thyroid hormone pills, prescription stimulates or the combination thereof).

All of these “truths” encompass only a small sampling of experience (most of the time, limited to a single person’s experience, the classic N = 1 “experiment” which is by no means an experiment, that would be called a case study), and relies on a small percentage of the facts that make up the entire content of Health Science. No one spends the time trying to disprove their idea. Once the dogma takes hold, it’s time to start preaching (and maybe to start selling).

You may, at this point, think I’m lambasting the entire diet industry. I am, but not completely. Advice based on a personal narrative and a dubious idea might turn out to capture some heretofore unseen truth. It might work. This is how a free marketplace of ideas benefits everyone. The best ideas succeed. In this case, the best ideas help people achieve their desired results. But the job of Science is to explain why so many crazy ideas do actually work.

Where this becomes pernicious, is when a government takes one of these conjectures and turns it into policy. At that point, it infects everything: public education, university research, medical training, Ph.D. work, textbook content, the way society literally defines health… Someone’s imagination victimizes an entire society. The same flimsy process of defining “truth” in Health Science is used by governments around the world and international health organizations. Gary Taubes documented this in his two books Good Calories, Bad Calories and Why We Get Fat, as did Nina Teicholz in The Big Fat Surprise.

Admittedly, I did the same thing (although I conducted focus groups to test these plans before promoting them publicly). In doing so, I failed as a scientist. I never did the hard work of really trying to disprove my idea. As time passed, it became harder and harder to hold onto my dogmatism. Too many facts didn’t fit. Eventually something had to give. When you’re fighting reality, you will lose.

Two years ago, I left the public eye to discover a way to fix my error, and everyone else’s.

(1) Justice Stewart: “I shall not today attempt further to define the kinds of material I understand to be embraced within that shorthand description [“hard-core pornography”], and perhaps I could never succeed in intelligibly doing so. But I know it when I see it, and the motion picture involved in this case is not that.