Intermittent Fasting: Part 2, The Fight's Over 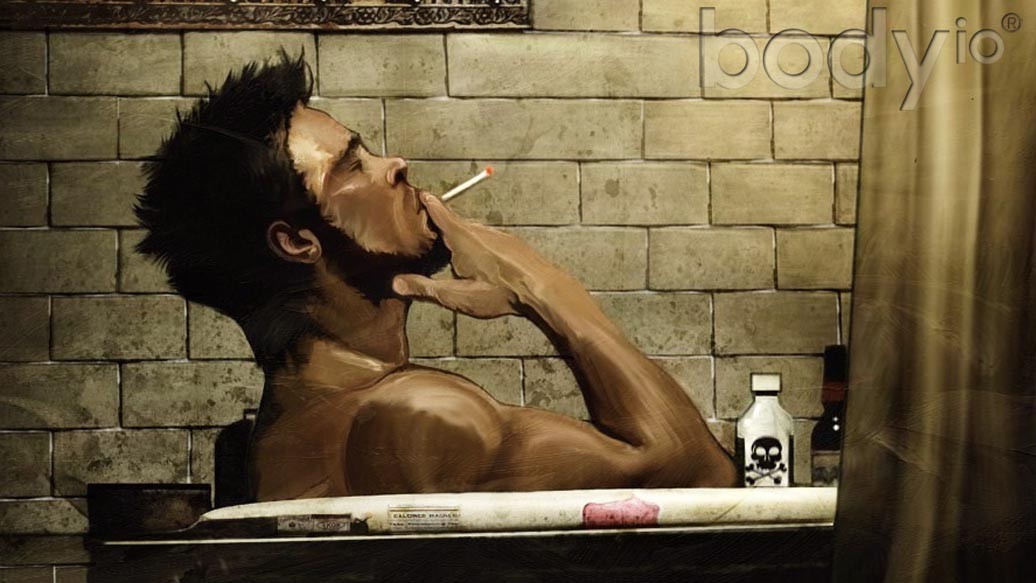 I like the idea of Intermittent Fasting, I’m just not keen on the results. It is easy to not eat all day then blast through a few thousand calories before hitting the sack (or burning the midnight oil in my case). I can say it definitely causes weight loss (at least this particular protocol)—the problem is what kind of tissue the lost weight comes from.

I’ve even used a modified version of The Warrior Diet* with aesthetic oriented athletes (like figure competitors and bodybuilders) during the last week of contest prep allowing them to eat hamburgers and French fries, pizza and fried chicken while still walking on stage shredded. For short bursts, it seems to work—whatever work means in this context.

(*Don’t take my comment here to mean I used The Modified Warrior Diet, which seems to have no place in performance nutrition.)

So, when my life turned into a maelstrom of work, when finding time to breathe, let alone eat seemed difficult, I thought I’d test IF (keep in mind this was not a formal test of all conceivable IF protocols, I simply needed to save time and from what I had read about IF, it seemed a plausible way to do so and preserve my body composition).

When I started, I trained only one or two days a week due to time constraints. I had been using Carb Back-Loading adjusted to my training schedule to maintain my weight and strength. I was at 220 lbs (100 kg) and had 6% body fat as tested by water tank. (This is the range—6 to 7% body fat—that myself and non-competitive clients hold comfortably year round with Carb Backloading; getting to that point sometimes requires a prior application of Carb Nite.)

The first week went pretty well, I felt good, my skin tightened slightly and no aspect of the diet was a challenge. I’d wake, have coffee—sans any nutritive additives like cream—and run the rest of the day without food and without hunger (due mostly to the hunger-control produced by long-term adherence to an ultra-low carb diet). At about 7 in the evening, I re-fed like nobody’s business (gluttony would be an understatement). My workouts (I could still only get one to two sessions per week) felt great.

Fast-forward to week 6. I knew I had to stop. For as convenient as it was and as easy, my body did not cope well. People kept telling me I looked “small”, not bad, just small. I had dropped over 18 lbs. I was not ripped, not shredded. Try flat and my skin felt loose. Actually, despite a quick enhancement of my 6 pack the first week, my abs, which I’d become quite fond of over the last year, disappeared. I looked like crap. My strength decreased with each workout after the first week. I was more than displeased.

Now, I admit that I’m an extreme case. I used to carry 20+% body fat but now my walking weight is 220 with a body fat percentage of six. At those numbers, I didn’t even have 18 lbs of fat left on my body when starting the IF experiment. I clearly lost lean mass during my IF trial.

At these extremes, however, we can evaluate the claims of dieting strategies, especially those purporting to produce lean gains or a decrease in body fat without losing muscle. I know my training schedule was not optimal, but with that same schedule (using a Shockwave program) I maintained my muscle mass and strength for over two months. The only thing I changed for the ad hoc IF experiment was my diet.

This transformation (more like a degradation) not only ignited my ire, it sparked curiosity into why IF didn’t preserve my muscle mass as promised, despite the supposed massive increase in GH. If there’s anything I hate more than losing muscle mass, it’s a question without an answer.

Let Loose the Dogs of War

Being muscular and defined is a war between breakdown and synthesis and for those drafted to the cause, the battle ensues from morning to night. Being jacked depends on shifting all forces toward growth and defending against destruction (as does, arguably, every facet of health). It turns out that IF is the Axis of Evil in this battle by shutting down synthesis and letting catabolic processes run wild like Lindsay Lohan on coke.

The body is not kind to muscle mass when fasting. Fasting rapidly adjusts several regulators of growth many of which act to shutdown the mTOR pathway**, one of the most critical pathways known for protein synthesis and protection against protein breakdown[1]. The cascade of suppression signals starts quickly, within 12 hours of fasting[2,3].

(**Although the details are complex, the shutdown is mediated by several factors critical to mTOR’s function, such as SIRT1 gene regulation, levels of which rise during fasting and negatively regulate mTOR[4,5] and AKT, which decreases in activity during fasting, thus down-regulating the mTOR channel[6-8]. )

Don’t downplay the importance of the mTOR shutdown. Inhibiting the mTOR pathway prevents resistance training from triggering muscle growth when mTOR is deactivated[9]. Not only can you not build muscle, but the same changes that prevent the activation of mTOR also prevent insulin from stopping the breakdown of muscle[10-11] (this is directly attributed to the decreased AKT activity mentioned above).

Also contributing to the anti-anabolic milieu is the fact that although GH concentrations increase, free IGF-1 levels decrease[12-13]. Although GH goes up, only its fat burning properties persist and it’s muscle building properties disappear. This decrease in free IGF1 suppresses the mTOR pathway even further[14]. By practicing IF, you get greater GH release but ablated anabolic response.

Eh, anti-anabolic? What do you care? Maybe you don’t care that you won’t grow. Maybe you don’t train for size, but you do train for performance and to perform, whatever muscle you do have is critical and probably hard-earned. You might care, then, that mTOR activation protects against the destructive effects of cortisol[15]. Shutting down mTOR (and all the changes that accompany this[16,17]) allow the catabolic steroids—glucocorticoids—to chew up muscle tissue.

(A full understanding of all the transcriptional, hormonal and nutrient regulators of growth is beyond the reach of science at the moment and definitely beyond the scope of this article, but here’s an interesting paper on the complexities involved: Regulation of skeletal muscle growth.)

Granted, my results constitute an observational case study. One subject, no hard data except a scale and definite visual, visceral and performance related changes, none of which I can classify as good. And the reactions caused by IF seem so esoteric and sciency, do they really contradict all the good research done directly on the transformative and performance enhancing properties of Intermittent Fasting? Because as emphatic as many of the proponents are, a decent body of research must exist.

But after two weeks of digging through research, reading, tracing through citations of other papers, all I found to test the power of IF was a single study done on humans. One. It describes the results of an every-other-day fasting schedule on body composition. Two things emerged from this study: 1) over the long term, there was no difference in total lipid, protein or carb utilization compared with a standard diet; and 2) the study showed that IF decreases metabolism over time[18].

Other studies on Ramadan fasting, even ones that control and match calorie intact between experimental groups demonstrate the same result[19,20]. It’s safe to say, that for fasts of 14 to 36 hours, there is no benefit, only cost.

(Oh yeah, did I mention that in animal models, IF also amplifies white-fat cells ability to store fat and shift nutrient partitioning toward body fat instead of energy use[21]? This alone could explain the drop in metabolism seen in the single human study: as the body pushes more calories into fat for storage, metabolism drops to accommodate the redirection of energy.)

These results explain what happened to me and why I was unable to maintain my physique and performance. Most people wouldn’t notice the deleterious side of IF because they start at such high levels of body fat that can mask—literally and figuratively—muscle loss and help maintain strength for a time.

But I’m interested in high-performance, not different ways to achieve average. I’m not happy with anti-anabolic protocols that allow catabolic reactions to run rampant. For the average person who doesn’t want to train, the anti-anabolic effect may prevent the formation of new fat cells along with preventing muscle growth. But for those of us who train heavy (even at just twice a week, I still trained heavy), each training session is severely catabolic.

Remember: muscle growth is the balance between the muscle protein breakdown (catabolic process) that occurs from training and muscle protein synthesis (anabolic process) ignited after training and for the next 24 to 48 hours or so. If you shut down the anabolic pathways, or impair them, you give favor to the destruction. And if you can’t stop the breakdown anymore, then you’re really screwed. IF does both. No more PRs, no more capped delts, no sexy abs—it’s all going to go.

(I should also mention the fact that fasting clearly decreases anaerobic performance[22] and power-production[23], two key elements of resistance training.)

The missing ingredient in intermittent fasting, or the overlooked piece of information, is that the body responds to both nutrient restriction and carbohydrate restriction and takes different actions with the two. The body is highly sensitive to nutrient availability and energy balance. Take away energy (all food) or over-tax the system, and anabolic processes shutdown and catabolic processes start up***.

(***Energy flux sensitivity can be instantaneous, as well, through activation of AMP-kinase[24-27] which also shuts off muscle growth via-mTOR down-regulation[28-30]. This is one reason that over-exhaustive exercise methods like CrossFit, Insanity Workouts and P90X stop muscle growth and repair and decrease performance.)

Take carbs out of the diet and reintroduce them at the correct time and you get all of the benefits of Intermittent Fasting. Take all food out of the diet and re-feed, and suddenly, you add in a batch of anti-anabolic, catabolic effects. As I showed in Part 1, carbs are the drug here, not simply food.

My training hasn’t changed, but I re-embraced the magic of Carb Back-Loading, even though it requires more planning and time. My size is coming back—back to 215, up from 202—and my abs are back thanks to a crazy new supplement called food. I started eating again, but according to Carb Back Loading, which imparts all the benefits and none of the downside of IF (abstaining from food completely seems to destroy all but the massive thermic effect of food—excess body heat—during the re-feed[31-33]).

Your first fast-breaking nutrition should prolong fat burning, trigger muscle growth and repair and provide the raw material to do so (but not a huge bolus) [34], and doesn’t need to be much, but something. I designed the A.M. Accelerator Shake with this in mind. You shouldn’t completely fast longer than 12 hours, ever. So, if you stop eating 2 hours before bed, sleep 8 hours, you should probably eat within 2 to 3 hours of waking. If you eat right before bed, sleep 6 hours then you can probably wait 5 or 6 hours before eating after you wake.

Like I said, Carb Backloading is Intermittent Fasting evolved.

In Part 3, I’ll cover the health benefits of IF and how to achieve them without IF.

Note: There are still times when I recommend going longer than 12 hours without food, but those are special situations, normally during contest preparation for a very short stint (maybe a single 20 hour fast) at a very particular time (three or four days before getting on stage), but even in these sans-food periods, I do have clients ingest small amounts of fat in one form or another—usually heavy whipping cream, coconut oil or a combination thereof with coffee.

Intermittent Fasting should be seen as a tool, not the entire toolbox.