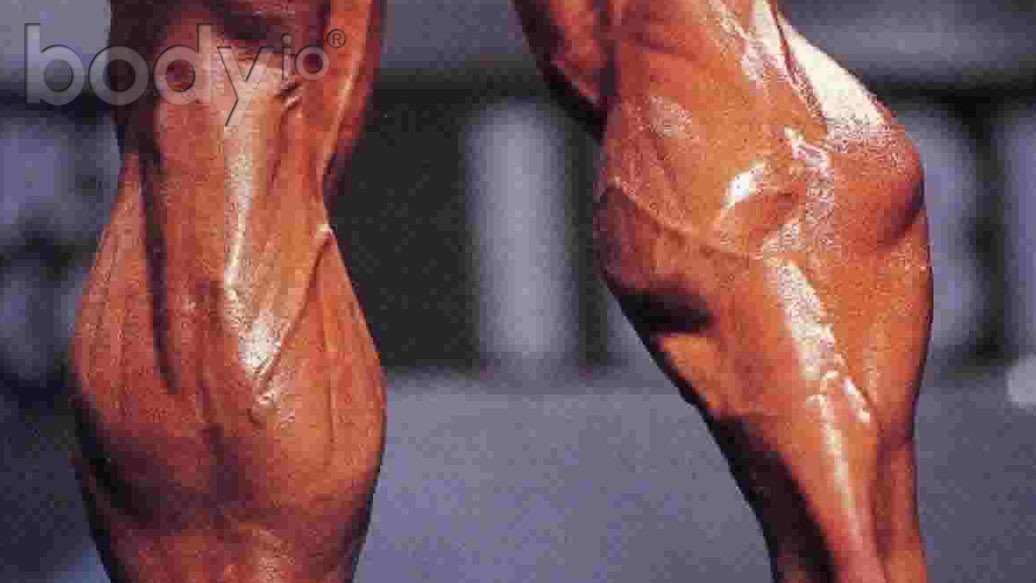 here’s no point in denying—so I won’t—that genetics play a significant role in the insertion, form and function of the lower leg, but the consequences of genetics do not excuse a pathetic lower limb. I’ve worked with a dozen people, all of whom told me they had beaten their calves to a pulp, tried every routine they could find and yet their calves simply wouldn’t grow. The long-sought-after split and double diamond points were a dream they had long since abandoned. Then they worked with me.

No one will claim that I have some magic formula from ancient times that was lost, one which I alone happened to find (this is a common story in the supplement industry). Instead, I did the obvious. I looked at the basic physiology, fiber type and activation properties of the lower-leg muscles and put together a program that any first year kinesiology student should have been able to come up with. The only difference between me and them is that I tend not to believe the establishment, compare common knowledge to fact, throw out what’s wrong, keep what’s right and modify as necessary.

Most people I know concentrate on training the gastrocnemius (gastroc for short, typically trained with straight legged calf raises) or the soleus (seated calf raises). They don’t train the two together, and if they do, they train the gastroc first, soleus second, the standard prescription of the bulging-calf gurus. For years, I performed this sequence with lagging results. If I had to guess, I’d say 90% of the people who read this do the same.

Stop wasting your time. Big calves requires brutal training of the soleus followed by isolated training of the gastroc. Brutal and isolated. Not a fun day at the gym, and I highly recommend dedicating a single workout to this routine and make preparations for the hobbling-after-effects (I suggest a wheelchair, walker or crutches).

The solution is simple: beat the soleus to a pulp, leave it exhausted and twitching, while sparing the gastroc, keeping it fresh for extreme isolation. Here’s the routine.

1) Seated Calf Raise, 100 reps in as few sets as possible

Load a seated calf machine with a 45 lb plate. Get seated and make sure the bend in your knee is less than 90 degrees (the sharper the angle, the more deactivated, and consequently fresher, the gastroc will be). A rep should be performed slow and controlled on the way down, achieving a full stretch at the bottom and a pause for 1 second before exploding into the ascent. Do as many reps as possible until near failure. If you didn’t hit 100 reps on the first try, rest for 30 secs and keep going. Repeat until you hit 100 reps total. (If you did hit 100 reps on the first try, you need to use more weight; if the first set was less than 30 reps, you need to use less weight.)

On an angled leg press, load up the machine with moderate weight. Get into position, with a roughly 90 degree angle at your hips, knees locked and feet slightly closer than shoulder width on the edge of the sled platform. Do 6 to 10 reps, which should be close to exhaustion. The reps, again, should explode during the upward movement, be slow during the decent with a pause of one second at the bottom. After each set, wait about 2 minutes and repeat. (If you are using 4 or more plates on a side, unlock your knees, maintaining only the slightest bend; this will protect the ligaments and tendons in and around the knee.)

Embarrassingly simple on paper, devastatingly difficult in real life: this routine might make you cry, it might cripple you for a week and it’s definitely going to send electric shocks through your leg, but it’ll take your calves to places you thought unattainable. As a bonus, this also fully develops the peroneals, the long sinewy muscles that run along the outside of the lower leg, giving the leg fullness from a frontal view and a crazy, snaky view from the side. To fully round-out the lower leg, I also perform tibialis raises either by placing my heal on a board or 45 lb plate and lifting a 25 to 45 lb plate with my toes, or with a dumbbell as shown below.

Some calves are made for jumping, others running and some are made for raw power. Regardless of the type of calf you have, there is no excuse to possess a lower leg that is underdeveloped, shapeless and puny. Summer is coming up—for once, be proud to be naked from the knee down.