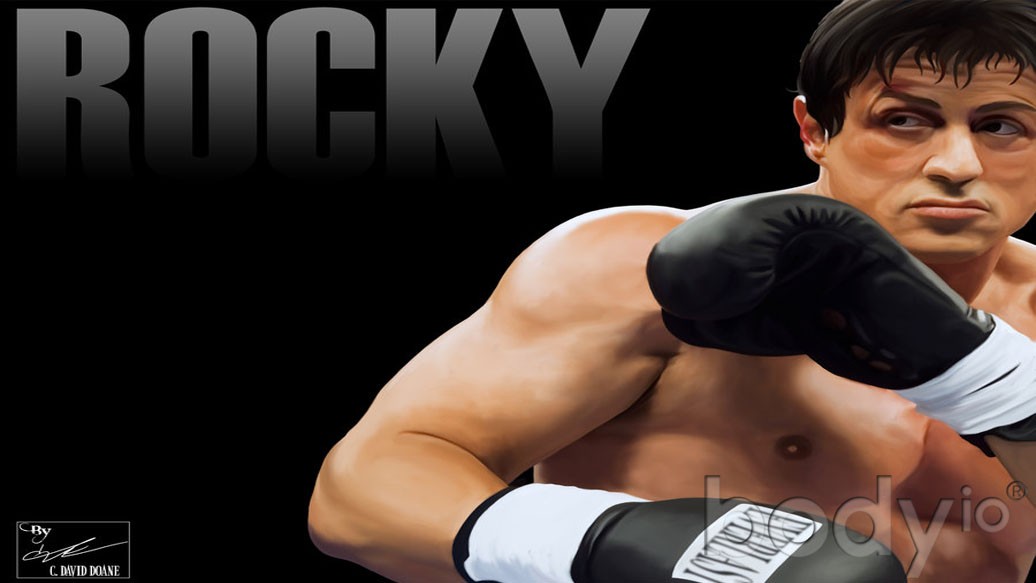 Rocky Balboa learned a tough lesson in Rocky III: sometimes destruction is needed for future growth. Nobody wants to go through the devastation, so why not always just grow? If we limit that destruction to the detritus, then the new room created by cleaning out the garbage lets us build back stronger and bigger.

Now imagine a purely destructive process that’s critical for building the very thing it destroys. It’s counterintuitive, to say the least, and the fact that such a process exists in the case of fast-twitch muscle forced me to take longer than planned writing this third installment about intermittent fasting (IF). I didn’t anticipate how advanced our understanding of certain biomolecular processes has become.

Conceptually, the idea of eating oneself conjures various mental images. In some cases, it seems like a horrible thing, but in others, it’s quite sought after. For example, gnawing on your hand isn’t the best thing in the world, but losing fat is. When you lose body fat, the body literally eats itself, a process called autophagy.

By definition and function, autophagy destroys tissue, making it purely catabolic. As damaged and unused material builds up within a cell, it gets sick and can die. So it needs to get cleaned up: autophagy to the rescue.

Several authors give an excellent review of the basics—which aren’t so basic and I recommend this paper[1]. Relevant to our discussion there are two types, macroautophagy (Macro) and chaperon mediated autophagy (CMA). (There is a third type, microautophagy, but it’s poorly studied and, therefore, poorly understood[2,3].)

To be brief, autophagy is a reaction to either starvation or internal cellular damage; fasting triggers both on different time scales. Macro is fast-acting and short-lived whereas CMA takes a little time to kick in. Each type cleans detritus from the innards of the cells, removing the junk for healthier cell function or recycling components for tissue repair when you’re starving—literally.

Autophagy, as I hinted above, keeps cells healthy by keeping them cleaned out. Think about it this way, how good do you feel when you’re constipated? Not very. Cells feel the same. Stuff builds up inside and needs to be cleaned.

Nowhere is this clearer than in skeletal muscle tissue. When autophagy is chronically suppressed (or knocked-out), chunks of non-functional protein accumulate, mitochondria (the cell’s power plant) develop bad mutations, and oxidative stress runs rampant. If autophagy fails, these conditions cause muscle fiber breakdown[4]—your muscles fall apart from the inside out and there’s really not much you can do about it.

Also, in times of nutritional deficit, like starvation, fasting or even rapid energy depletion such as happens with sustained exhaustive activity like CrossFit, autophagy actually helps to slow and protect against muscle loss[5, 6].

Take note: autophagy is also part of the destructive process. In most tissues, Macro activates within a few hours of nutrient deprivation and only lasts a few hours. In fast-twitch muscle, however, the process can just keep going[7].

When this happens, the body is recycling chunks of protein in the muscle for use in repairing larger structures as they suffer damage[5, 6]. Autophagy helps preserve lean tissue by destroying fast-twitch muscle for spare parts. When you withhold food for a few hours or more, your muscles become a salvage yard. Obviously, muscular autophagy can only sustain muscle mass for so long until it runs out of junk material and starts destroying the entire muscle fiber. Autophagy is one of the main pathways of skeletal muscle breakdown[28].

Skeletal muscle is not the only tissue whose cells get filled with junk and could use a bit of spring cleaning from time to time. The cells of the nervous system, particularly brain neurons, become healthier, more robust and able to form new connections better, a process called neuroplasticity[8-10], when autophagy is routinely stimulated. Autophagy, literally, makes you smarter.

There’s also mounting evidence that the benefits of calorie restriction on muscle quality later in life and the benefits of exercise depend on properly activated autophagic pathways[31-33].

Autophagy is pretty damn important for skeletal muscle health, but so is how we regulate it.

We can trigger the first type of autophagy, Macro, with simple fasting. As I mentioned before, fasting triggers Macro within a few hours. Key point: macroautophagy is transient in nearly all tissues except fast twitch muscle[7, 11]. The body stops autophagic tissue destruction after only a few hours of initiation except in fast-twitch muscle. Bursts of Macro never last very long and need to be continually re-stimulated by eating, then fasting.

CMA, the other type of interesting autophagy, isn’t triggered directly by starvation. It’s regulated by ketone build up[1, 12]. If you’re in ketogenesis, autophagy is keeping your cells healthy and happy by cleaning out the gunk. Any type of ketogenic diet – Anabolic Diet, Atkins Prep Phase, Carb Nite, Carb Back-Loading, South Beach Induction Phase, various IF protocols, low-carb Paleo plans – all activate the chaperon mediated autophagy. Spiking free fatty acid levels—which can be done with MCT or coconut oil—also cause a strong increase in ketone production[23-25].

Autophagy is pure catabolism. We don’t want to it run unchecked. It’s not that tough and we can actually throttle autophagy or shut it off.

I talk about mTOR a lot, but that’s because it connects almost every muscular growth and degradation process. In this case, mTOR activation isn’t a direct regulator of autophagy, but it does, in most instances correlate with autophagy activation[13-15]. If mTOR is being stimulated, Macro activity is low; if not, Macro is high. Macro is always off when mTOR is getting a strong growth signal.

This isn’t the same as mTOR being shut-off which allows for degradation by autophagy[39-42]. It only means that unless a nutrient or system directly activates mTOR then Macro can function. For instance, mTOR can allow growth at night, but Macro can still clean cells. This is why the 12 hour window of fasting is the critical period—at this point, processes can inhibit the mTOR pathway and allow Macro to destroy our muscles.

Chaperon mediated autophagy (CMA) is different. Ketone-activated autophagy (CMA) functions independent of mTOR activation[34-38]. In other words, we can keep CMA going without sacrificing muscle. The nice thing here is that with energy influx (i.e. we eat something), we get the health benefits of autophagy and avoid the signals that trigger tissue breakdown. We also gain protection from skeletal muscle breakdown through ketone buildup[26].

Shut It Down, Shut the Field Down!*

Sometimes, we absolutely want to shut autophagy down to the fullest extent possible in fast twitch muscle, like after resistance training. Autophagy is suppressed during resistance training, but the buildup of reactive oxygen species (ROS, also known as free radicals), if left too long, triggers a strong autophagic response that can tear down muscle[16, 17]. The ROS buildup is hormetic: a little bit triggers growth factors, too much triggers destruction[18].

We can combat this destruction on several fronts. Amino acids can be highly suppressive to autophagy and in muscle, it requires both leucine and phenylalanine to shut autophagy down completely[2]. It turns out that autophagy is the only catabolic trigger that we can shut off with nutrients after resistance training[19].

(*If you don’t get the movie reference, don’t worry, it’s a geek thing from the movie Real Genius.)

This post might not seem to fit with IF, in that it just covers autophagy, but IF now claims magical autophagic properties, playing on the ignorance of the health and fitness community, and even some of the less informed experts. IF does trigger autophagy[12], but as you can see, none of the them from LeanGains to Eat-Stop-Eat do so optimally and anything recommending 24 hour fasts or longer is triggering catabolic processes specifically in fast-twitch muscle fiber. You may not notice this effect immediately, or at all, if you carry only a minimum of muscle, but if you’re pushing the envelop or shooting for maximum hypertrophy, fasting is not doing you any favors.

Macroautophagy stays on for 24 hours or longer only in fast-twitch muscle if we don’t eat. You know fast-twitch muscle: the stuff we all work so hard for. Autophagy stimulated by prolonged fasting is destructive; it’s passed the point of beneficial. Prolonged fasting triggers autophagy to deteriorate muscle tissue faster than severing the nerve to the muscle[29, 30]. Unacceptable after all the hard work we put into building it.

The only thing IF does for autophagy is to drive it into destructive ranges for fast-twitch muscle.

I know that people say these things work, but they’re usually sitting at 22% body fat or higher and dropping to 16% or so for men. That’s not tough and it’s established that body fat levels dictate muscle loss during weight loss-via calorie reduction—the fatter you are, the less muscle you’ll lose[20, 21]. And as was shown previously in this series, IF protocols perform identically to standard calorie reduction when it comes to body composition changes[22].

The ideal way to manipulate autophagy would be to allow fasts long enough to trigger macroautophagy without down-regulating the mTOR pathway, which can occur within 12 hours of fasting. At this point, eat something. If we spike free fatty-acid levels, or keeps them sustained, then the body continues producing ketones, which are the sole regulator of chaperon-mediated autophagy. This procedure has several cerebral benefits and not only will it avoid the atrophy of fast twitch muscle, but ketones protect muscle tissue from degradation.

Then, when it comes time to train, your sympathetic nervous system—the one that controls fight-or-flight response, adrenaline and all that good stuff—is primed for action with bigger adrenaline pulses, faster response and stronger activation (see The Hulk Factor). The heightened burst of adrenaline also fights proteolysis[27], or muscle tissue breakdown.

This can only occur if insulin levels have been kept low all day and you’ve been eating something—otherwise, the long-lived fast can trigger adrenaline release before the workout and destroy the advantage.

At this point in the day, we’ve optimized performance, preserved muscle mass and allowed beneficial autophagy to run its course. Train. After the session, spark growth as rapidly and potently as possible by spiking insulin levels, providing raw materials for growth and shutting down the one catabolic component we have control over: destructive autophagy.

Once the frenzy is over, it’s time for bed where we’ve made sure our food choice cleared as quickly as possible to allow macroautophagy to work through the night.

IF is Nutrition’s Apollo Creed

In the first Rocky, Apollo Creed was the unchallenged boxing champion of the imaginary pugilistic world and after reading a horrible article by an IF author describing enhanced muscle mass through autophagy, I realized that Intermittent Fasting (IF) is Apollo’s dietary equivalent.

With no real challengers, IF has emerged as a champion, and in its own right, IF is a champion of diet—against average diets. It is a little better, if only because it triggers a therapeutic clean-up process at the cellular level and for most people it’s easy.

But now, I’m challenging. The research consistently shows that the only thing IF brings to the table for athletes is detriment. IF shuts off the very anabolic processes on which we rely for improving performance. IF manages to drive beneficial metabolic processes into destructive cellular chaos. In the research, IF consistently demonstrates that is no better than an average for fat loss or muscle gain and it decreases athletic performance.

Rocky Balboa, the unknown underdog, went toe-to-toe with the champ. No clear victor appeared after the first match—the champ winning by default—but Apollo kept accepting challenges and we know how that story ends: Rocky beat the crap out of him.
References (click to expand)