The Goldilocks Zone: Too Hot, Too Cold Or Just Right? Part I: Muscle Thermodynamics 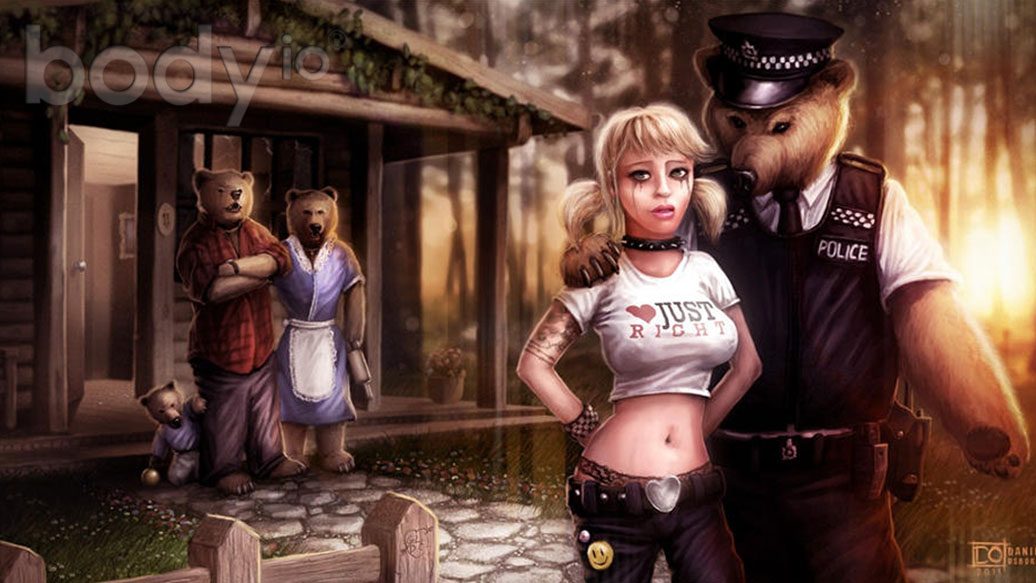 ost people can’t remember how the story of Goldilocks and The Three Bears ends. Most people also don’t know the moral of the story, including me. But everyone remembers the basics: an unruly troubled youth, female, ransacks the house of a peaceful family by taking everything that’s “just right”. However you remember the story, it’s that last part, the “just right” that people remember about Goldilocks. The Goldilocks Zone, therefore, is a term that’s understood across cultures and academic disciplines as an interval where everything is just right.

The human body is, at its core, a heat engine; it burns fuel through an incredibly complex regulatory system and converts some of the energy into work and the excess is dissipated as heat. Every heat engine has a Goldilocks Zone for temperatures where it functions best. It runs too hot and the power output goes down. Too cold, it’s the same problem. It needs to be just right.

Calculating the optimal temperature range for any system is normally an empirical task. Take a set of measurements, plot the data and find the peak value of whatever variable needs optimizing. Optimal power might be the goal, or maybe optimal oxygen efficiency. Optimal power and optimal efficiency will never occur at the same temperature. The world runs on tradeoffs and compromises.

Just because peak efficiency lies outside our day-to-day physiological temperature spectrum doesn’t mean that everyone should start training in a meat locker. Most animals don’t run at peak efficiency. Most animals, including us, run at peak power. This may be a manifestation of Odum’s Maximum Power Principle (in a nutshell: a complex system will survive longest by maximizing power output instead of increasing efficiency).

The internal temperature for peak power takes some work to get an estimate on. Two studies found internal temperatures ranging from 100° F (38° C) to 101.5° F (38.6° C) increased power output (and efficiency a bit)[2-3], but this doesn’t tell us if these represent values where power maximizes. Maybe it’s higher still. Let’s check.

Assuming that, in principle, muscle acts like a heat engine opens the problem to theoretical calculations. I chose to use the biceps as my representative muscle since all the fibers run in the same direction, which means I don’t have to consider as many complications stemming from pennation angles.

Using the formulas for maximum work at a given temperature in idealized heat engines[4] and finding the heat capacity of skeletal muscle tissue[6] along with the other variables (the torque moment of the bicep insertion[5], the estimated mass of an average biceps, the average amount of mass that could be curled, the temperature of the skin…), I calculated peak power at an internal temperature of approximately 101° F (38⅓° C). This is a pretty good match to the studies. Note: this isn’t much higher than body temperature compared with the lower threshold. There’s a reason for this that I’ll discuss later.

There’s value in understanding how well a basic physics equation can describe the complex thermodynamics of muscle, so…

Simply put: dehydrated muscle gets hot faster and stays hot longer. This shouldn’t affect absolute strength because if the force is slow and steady, the heat has time to dissipate; it should affect explosive power, particularly during successive repetitions. Power is how fast the maximum force can be applied, which requires the production of a lot of excess heat faster, which can no longer dissipate quickly. This is what the research shows: dehydration doesn’t affect strength, but does lower power production[8-12].

Our predictions around dehydration turned out to reinforce our trust in the simple physics model.

Looking at thermal stress requires a little more discussion that dehydration. If you think about an object being heated—or cooled—two types of thermal stress occur. The obvious stress is when the thing gets so damn hot it loses integrity and melts. Imagine a glass blower warming up her super-sized glowing gum drop of molten silica. In a biological system, this type of thermal stress could lead to heatstroke or tissue damage.

Problems usually occur much sooner than this. Besides the environment, where muscles can attempt to dissipate heat, the core of the body also acts like a heat sink. The Goldilocks Zone for muscle tissue has a large range, down to 89.6° F (32° C) an all the way up to 101° F (38⅓° C). Working muscle can reach even higher temperatures at the cost of efficiency. Even though the temperature of working muscle can vary so much, the core of the body still tries to maintain the standard 98.6° F (37° C). At a critical core temperature, fatigue sets in.

As the internal temperature of the core and consequently the muscle tissue increases, performance decreases until the muscle responds by shutting down[12-14]. This happens at what can be considered our maximum operating temperature: 103.5° F (39.7° C). After this point, permanent tissue damage and death become a concern.

Again, our simple model still fits with the data. Power drops off if muscle accumulates too much heat and the internal temperature rises above the Goldilocks threshold. And for exercise duration greater than 30 minutes, a lower ambient temperature helps to maintain performance[15-16]. At these durations, the internal muscle temperature has equalized and the muscle can dissipate heat into the environment as fast as it’s generated.

There’s a second type of thermal stress that everyone forgets until they pour cold water into a glass pan fresh from the oven. Depending on how hot the oven was, there’s a good chance the pan will shatter. Part of the pan cooled down too quickly which caused structural changes in one part of the glass too fast for the hotter sections to compensate for. Muscles work the same way.

This is not to imply that muscle can become so unevenly heated or cooled as to explode into shards. But when there is a temperature gradient across a muscle—so one part of the biceps, let’s say, is a different temperature than another part—the work capacity drops. Muscle experiences the same type of thermal stress as a glass pan, although in less spectacular fashion.

Whenever there’s a temperature gradient, the entire muscle only functions as well as the worst part and tries to equalize temperature across the entire muscle[17]. This is an amazing result for a couple of reasons. First, the researchers developed the model with only thermodynamic arguments, much as I did above, and were able to recover what’s known as Hill’s muscle model, which was considered a purely empirical model[18]. After more than 70 years, it now has some theoretical footing.

Second, these results should make anyone hesitant to recommend muscle heating and cooling treatments. Heating or cooling of muscles requires that the muscle body’s temperature is kept even during the process otherwise metabolic stress will ensue[19-20].

Alternatively, if the goal is short duration high impact exercise (like HIIT), we can use this information to our advantage by performing in a hotter environment[21]. This could allow the muscles to achieve a more uniform temperature closer to the Goldilocks threshold before exercise begins. I surmise that this would only work for very short duration very high power type activities.

Congratulations. I can’t believe you’re still reading. You’re either a geek or masochist. Either way, it’s time to wrap things up.

This was a brief introduction to the thermodynamics of skeletal muscle tissue, especially in the active state. The Goldilocks Zone runs from 89.6° F (32° C) to 101.5° F (38.6° C), in most training situations, only the higher threshold matters. With ample hydration and wise planning, you’re likely to always be in the Goldilocks Zone.

Not that any of this information is too terribly exciting, but it is necessary background for what comes next.

Part II : I go over the hot topic of heat shock proteins and performance, and I’ll let you in on the gargantuan secret no one’s willing to talk about. Diet also plays a role in the Goldilocks Zone, which I discuss.

Part III: I cover the topic of cryotherapy and athletic performance and the number of ways you can apply it to your own training and recovery.